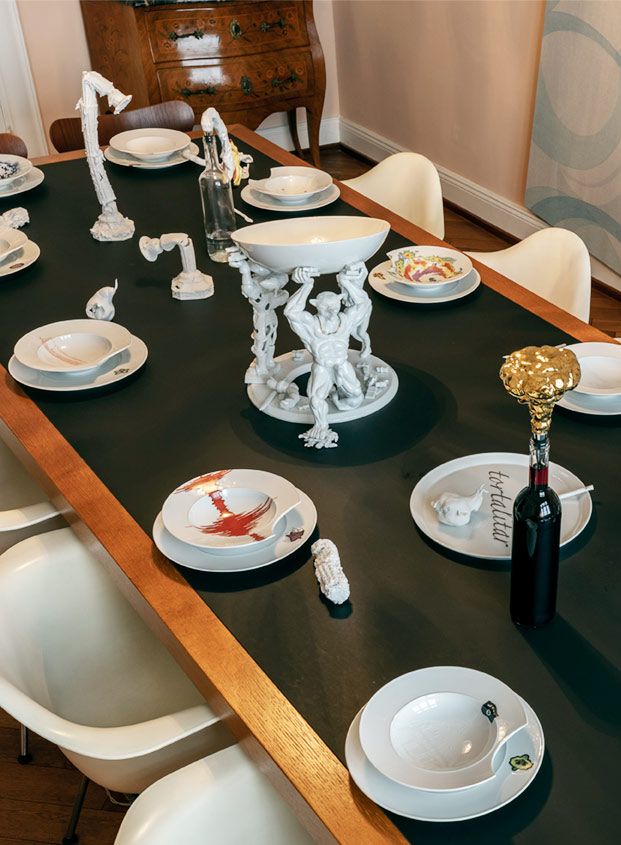 HAMBURG.- Europa riding the bull is a popular motif in classical porcelain art, of which Berlin artist Rona Kobel has devised two contemporary variations. The first remains true stylistically as well as in its minutiae to the classical models, whereas the second version departs radically from sedate home decoration. Europa has climbed down from the bull and is ramming a knife into her breast. With Brexit and Eurosceptic politics in many countries: is Europa at an end?

Rona Kobel’s resolutely formulated concern is the question of the „stability and defensibility of democracy and freedom“, for which, however, she makes use of different media than those commonly expected in political art.

The „Europa“ is just one of numerous porcelain figures and accessories the artist has designed as „political tableware“, and then produced in Berlin’s „Königliche Porzellan-Manufaktur“: dinner plates and soup plates, jugs, diverse smaller accessories, and a grand centrepiece with a large tureen. The latter, however, is stranded at a precarious angle, because the three figures carrying it don’t seem to be up to their task. These are collage-like monsters, intended to represent capitalism, freedom, and the rule of law. However, a greedy, all-consuming musclehead, a coquettish, self-absorbed, and lightly-dressed lady, and a battered, empty suit of armour are clearly not in a position to maintain social stability.

The role models for these caricatures are allegories, intended to vividly embody the abstract concepts. During the Baroque and Rococo such allegories populated not only castle gardens, but as porcelain figures they also added to the decoration of interior rooms and dining tables. The iconography of porcelain tableware and figures served to represent and underpin a feudal system, and civil society also sought to benefit from its flair. Yet in the modern era the handed-down porcelain service became synonymous with one’s grandparents‘ tastes, and as superfluous ‚bric-a-brac‘ was suitable at best for the flea market.

Even the greatest masterpieces of porcelain art are generally only exhibited in arts and crafts museums, and not in fine art museums. When modern or contemporary artists such as Picasso turn to ceramics, the raw surface of the clay is often preferred to the glazed surface. One also hardly expects critical political statements in cutting-edge ceramic art. Furthermore, when artists graciously invite you to the table, as Rona Kobel does, then that generally involves not traditional tableware, but mobile, self-constructed trappings, such as in the work of Rirkrit Tiravanija, who has served Thai food in exhibition rooms since the 1990s.

Rona Kobel also subversively infiltrates this type of „service art“. For the soup, once one has ladled it out and can gaze into the depths of the bowl, could leave a nasty taste in your mouth. The motifs which „adorn“ the bottom of the soup plates are derived from media images of lynching carried out in the last few years in Afghanistan, India, or South Africa, and of natural catastrophes (hurricanes, tsunamis, droughts, and earthquakes). A third group of motifs illustrate fantasies of political omnipotence, such as the conquest of Rome by ISIS, or Putin’s Satan II rockets as demonstrating ambitions of military world domination. The decorations on the dinner plates appear more pleasing. The flowers on their borders, however, feature an unpleasant aspect that is not directly visible. They have been given names which hold clear racist connotations.

The wine bottles can be plugged using stoppers modelled after the atomic mushroom cloud over Nagasaki, or an exploding Molotov cocktail – and bearing the corresponding nicknames „Fat Man“ and „Molly“. Thus, the corks can continue to pop on and on in one’s imagination. As well, the candle holders look as though they have fallen asleep, letting their heads droop, whereby associations with possible states of another male body part also cannot go unnoticed. Rona Kobel’s tableware is definitely not ‚house broken‘, yet unlike political themes, sexual ribaldry certainly was part of the standard repertoire of the Rococo.